Standard sudoku rules applies. Fill the grid with numbers from 1 to 5 so no repeated digit in every row, column or region.

Label the position in each region from top left to bottom right with digit 1 to n. top comes first then left. 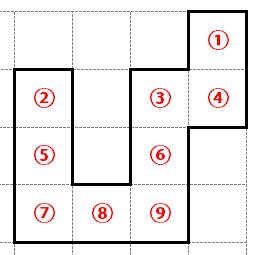 Small digit in the right corner of the cell indicates its position in its region. 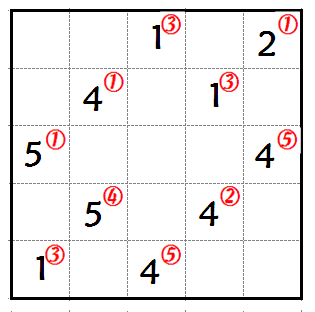 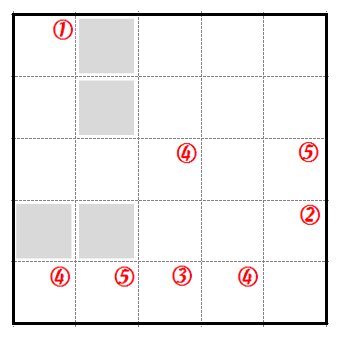 these puzzles were made by Real Smile from China. There are many reasons why I don’t like these, which lead to my next post. I can see why some might like these so I still post it. It’s my idea after all. First reason, difficulty. That’s way too easy. First one took me around 30 seconds. I solve it while I complain it. Then came the next one, well that’s around 5 minutes. However according to my experience, the actual solve time should be half the test time, because of brute force, multiple solution and other stuff.

Second, the execution. Personally, I hate small digit, unfriendly to short-sighted and the continuity of the clues is not that great. Image a killer with given digit. To be fair, that’s his puzzle style. He always goes for the cleanest grid execution. I really don’t care. For me, the continuity of the rules is more important. I want the rule to melt into all the other things, like naming, actual puzzle or tricks. So when I ask him to develop this rule, I also give him the name of this variant. I just don’t want it to be named after some ancient or Taoism, random words(like type good, that translation is killing me.) or chaos construction.

In a word, the feeling of these puzzles is not what I like. Old Miles and borescoper’s puzzle fit more of my taste. Well, I haven’t post an easy puzzle for a long time, so hope you’ll enjoy.

here’s what I found interesting between mine. Let’s see how long can I last.

trainscraper(SirSchmoopy), snake variant, also shows what happened when a skyscraper disappear. I didn’t see that much improvement in this rule, so I think any of the three should feel the same.

crosshatch(jovi_al),easy enough to give it a try. Still wondering if fully colored is possible. Later zetamath also post one with renban. I ‘m just not interested enough to check another one.

duos(Niverio), not my dish, but some might enjoy this one. Classic way to combine different rules.

sandwich cage(Tom1i), not the sandwich cage I knew of, but interesting. It’s more like a between line variant than a killer variant. I mean, ends and between, hmmm.

Chess(CJK), there was a time when chess plays a lot in Sudoku. Thank god this one doesn’t go that far.

chained killer(Shinya),remind me of a puzzle. Just saying, that dot really looks like a zero.

corners(PetLov), I’m wondering, have many pattern can one box have.

am 27. August 2021, 03:13 Uhr von filuta
really very easy (like you announced), but nice relax for me after finishing setting of my last puzzle, which was giving me a pretty hard time, thanks.

Bigger: I did not notice that. That's interesting. I don't know how the name Real smile came from, But it's already in use, so, ok. There's Also another part of his online Avatar name like type good. It's a four character name. Usually I would ask the author what do they want to be called, unless the name is already out somewhere. Miles is the English name Old Miles's son chose to have. That's a good story material. Another fun fact, Miles actually don't like Sudoku or variant, he just don't have the interest. Even when his dad put a variant on the fidge As spring festival decoration, he just can't.