(Eingestellt am 11. Juli 2021, 04:23 Uhr von SirSchmoopy)
This uses a similar notion of snakes drawn via knight's move constraint as one of my last puzzles. I believe the changes to the rules make this solve much more enjoyable. That said, I'm still very new to setting puzzles and would love any feedback on how to improve. Also thanks to Burning Curtains and Bartholomew III from the CTC Discord Server for helping me test this. 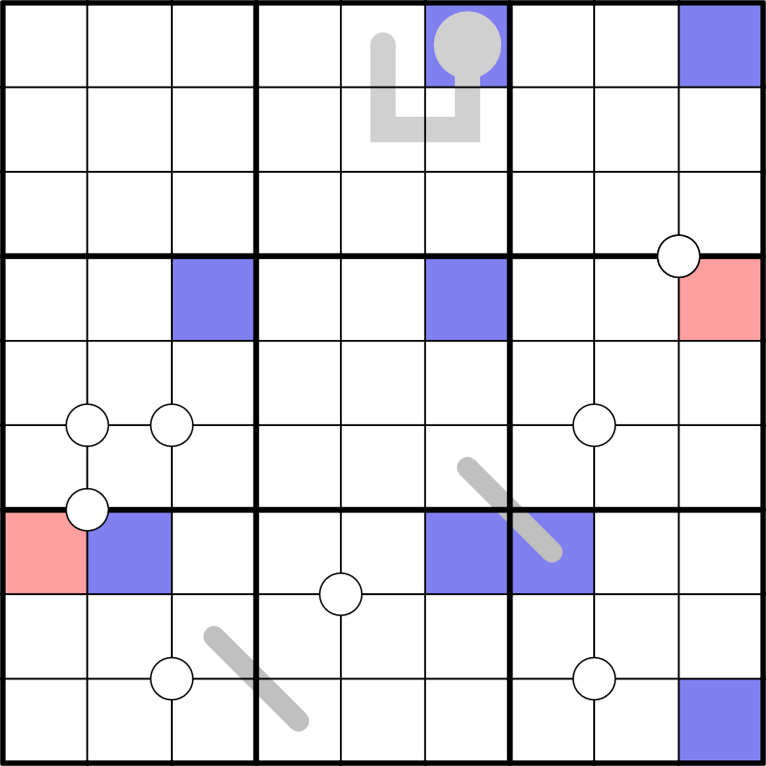 Normal anti-knight rules apply. Digits must not repeat in cells that are a chess knight's move apart.

Digits along the thermometer increase starting from the bulb

Draw an orthoganally-connected snake from R7C1 to R4C9 that that satisfies the following conditions:

Blue cells with a square are 'knight cells' that are not part of the snake, and satisfy the following conditions:

Circles where four cells meet indicate that at least one of those 4 cells must contain a snake cell whose digit is a valid count using the same logic as knight cells.

There are two options depending on preferences, the first link should be more accessible for anyone who is colorblind:

am 23. Juli 2021, 19:06 Uhr von SudokuExplorer
Lovely snake puzzle which makes good use of all the rules. The 1 to 8 rule was more important in this one than the other snake/loop version. Thanks :-)

It's worth mentioning that this puzzle does not have any Nurikabe rules, but the snake has a space-filling property.

am 13. Juli 2021, 22:08 Uhr von VykkDraygo
The ending was tough! Kept missing a single knight's move restriction. Glad to see this was re-uploaded. I had started the previous version, and saw it broke after getting the snake. Really enjoyed this!