(Eingestellt am 2. Juni 2022, 23:35 Uhr von Jreg)
A couple of days ago, Simon of the YT channel Cracking The Cryptic posted a video including a certain Sudoku entitled "Just Wrogn Enough" by Lerroyy. The rules of that Sudoku basically state that you have to ignore whatever the variant rules usually state and do the exact opposite to find the correct solution. (You can go watch that video and/or try that particular puzzle by clicking HERE if you'd like.)

Since I saw that puzzle, I'd been obsessed with setting a Sudoku that would solve in two different ways, depending solely on whether you choose to follow the standard variant rules, or their direct opposite. This is what I came up with for that. It took me many days and many attempts and in the end, I'm just proud I could even finish it. So, no joke, it's up to you to decide how to solve the puzzle. Or you could do both. Just be wary that the "negative" path is a bit more challenging to solve (as it was to set). 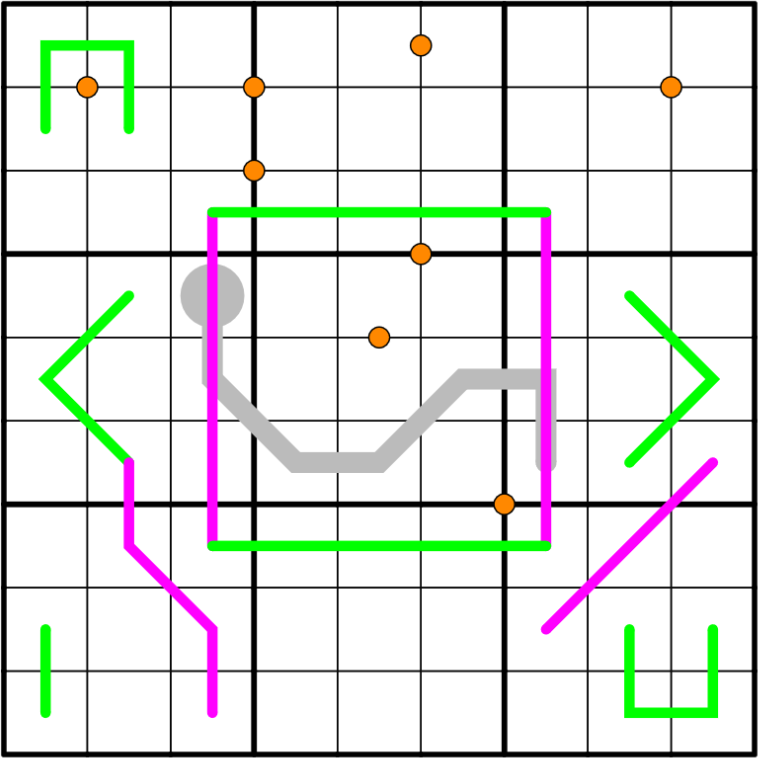 The rules are as follows:

Choose how you wish to solve this puzzle: you can either strictly obey the variant rules, or strictly disobey them. Each path has a unique solution.

If you choose to obey the variant rules, the following applies:

Along the thermometer, digits must increase from the bulb end. Along the green lines, any two neighboring digits must have a difference of at least five. Along the purple lines, digits must form sets of unrepeating consecutive digits placed in any order. If any orange dot touches a group of digits, one of three conditions must be met by a pair of digits in said group: A) the paired digits are consecutive; B) the paired digits have a 1:2 ratio; C) the paired digits are the same (if allowed by standard Sudoku rules). In groups of 4 digits, only one pair (which must be determined by the solver) can be affected by the orange dot. Not all orange dots are necessarily given, and the groups may overlap.

If you choose to disobey the variant rules, the following applies:

Along the thermometer, digits must DECREASE from the bulb end. Along the green lines, any two neighboring digits must have a difference of LESS than five. Along the purple lines, digits must form sets of unrepeating digits of which NONE are consecutive. If an orange dot touches a group of digits, absolutely NO pair of digits in that group may be consecutive, have a 1:2 ratio nor may they repeat. Not all orange dots are necessarily given, and the groups don't necessarily overlap.

Lösungscode: In this exact order and without spaces, enter the following total of 10 digits, according to the code: c=column number (from left to right), r=row number (from up to down).

(I apologise it's this complicated, but because the puzzle has two unique solutions, I had to pick the digits that end up in the same position in both cases.)

am 6. Juni 2022, 22:52 Uhr von Felis_Timon
I've solved the normal version. Am I allowed to use the solution code as an extra clue for the wrogn-version?