What's with the crust these days?

(Eingestellt am 26. Juli 2021, 19:55 Uhr von filuta)
The direct thematic inspiration for this puzzle was (apparently very hard) puzzle by RockyRoer. This one is intended to be much easier in the sense that no particular step is too difficult, but I must say, no other ruleset was messing with my head as much and it is really easy to make a mistake with this one. This in turn may make this puzzle much harder I think. Big thanks to a CTC discord member Angel for helping me find an error in the previous version of this puzzle.

- Normal sudoku rules apply.
- The numbers outside the grid act as the normal sandwich clues except the crust may differ from the usual 1 and 9. More precisely: number clue N outside the grid means that there is a pair of (crust) digits, say X and Y, such that the sum of the digits sandwiched between X and Y in the respective row or column is N. These pairs of crust digits may vary among the rows/columns (but may also repeat) and are unknown to the solver. (So in other words, this just means that there is a connected set of digits with sum N in the respective row/column with the end cells removed)
- The smiley faces outside the grid mean that I wish you a lot of fun with the puzzle. 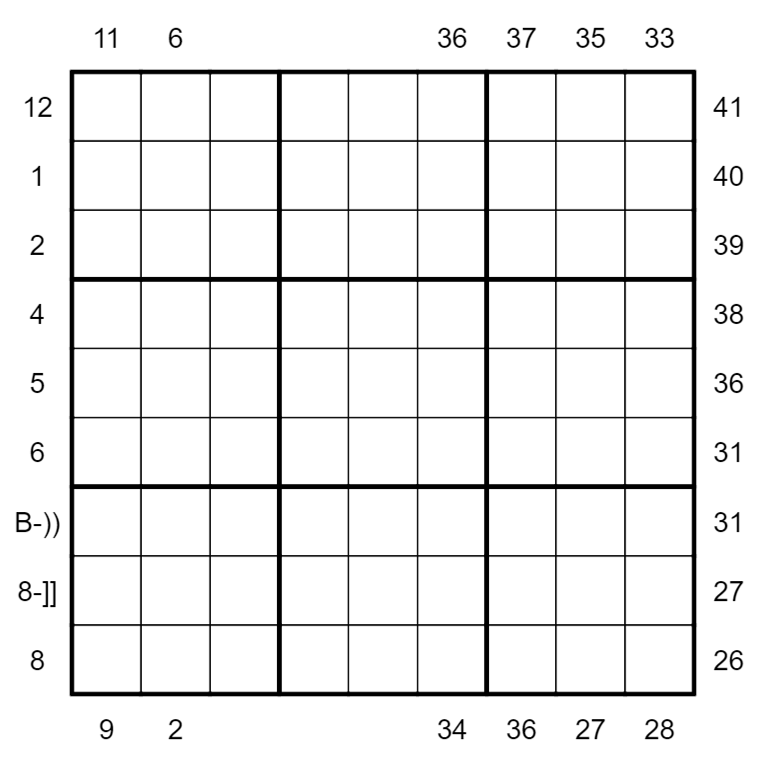 Lösungscode: row 5 and column 5 (without a comma or a space)

am 28. Juli 2021, 22:35 Uhr von bigger
Since you mention it, I guess I have to comment. The n-sum is rooted in X-sum, whose tricks have one thing in common, a starting point. So basicly, Any variant with a sum with a starting point can be considered as an X-sum variant.
As for this puzzle, It's a sandwich variant, you even say it yourself. The thing that sandwich has is that sum without ends. No matter what happens, the sum can never touch the side. There's no start, But There're two or more ends. So in a sandwich variant, two Kind of tricks might be used, one concerns the location of the ends, the other one concerns the possibility of the sum without ends.
In your puzzle, the tricks are Mainly sum without ends. It's very different from the n-sum I post. I don't think it's wise to link to my post. Afterall, it's easy to think of an X-sum variant idea rather than a sandwich variant idea. If you really want to link to other puzzle, I suggest maybe the puzzle you like or other sandwich variant. It's a little weird if you get the idea from one author but link to others puzzle, especially when I know the logic is not the same.
............
As i wrote, the puzzle by RockyRoer was an inspiration for this puzzle only thematicly, I didn't solve it and I assume the logic required is quite different from my puzzle. However, I think it's only fair to acknowledge any inspiration, even if it might not be substantial.

Also, since you solved my puzzle, you surely know, that even though it is a modification of the sandwich variant, the logic required to solve it is very different from the usual sandwich sudokus. On the other hand, after solving two of n-sums puzzles you posted (I couldn't solve the third one), I felt that the logic needed there is quite similar to my puzzle, epspecially with the 9x9, with the two opposing clues sum to more than 45, since this case is a lot about the intersection which is the same as in my puzzle (where the intersection are the edges).

Of course, I respect your opinion that your puzzles shouldn't be likned to mine and will stop doing so (I deleted the links already).

Anyway, thank you for your insight (and also for solving my puzzle).

***bigger: you're right considering the sum with 45. However, the end result is different. In n-sum, the intersection part must be in the middle. Also that part can only have a difference of 1/2 to be useful.
However in your puzzle, only one side clue is enough to compared to 45. And the difference of 3/4 with 45 is useful. Another thing is that the clue you chose for this puzzle is very friendly with the sandwich solver. Sure it doesn't have the similar locating 19 step like other sandwich variant. But the usage of the sum, the inside sum and 45-ends-inside sum makes outside sum is still the same.
Another thing about n-sum series is that it's a blackhole. It trys push X-sum to one end and have a very similar trick set with battlefield Sudoku, which has even more puzzles. Linking to n-sum means linking to a very big puzzle collection. Choosing the right one to compared with is kind of hard. Your puzzle is close to two X-sum spinoff that I knew of, when the x is not the first digit. Another thing is n-sum belongs to a series that's not named by n-sum. There's too much emotion in that series to prove people wrong.
Anyway, I'm not convinced that the logic is similar. 45-Sum is what every killer/sum has in common. The uncertainty aspect of the rule does kind of looks alike, but logic, I need some extra evidence.
.......
You know, after thinking about it more, I think you are right, it was more like a feeling on my side and this kind of logic is really common to a wider group of puzzles. It only shows my lack of experience and knowledge. The uncertainty is a common factor, but that's probably it. Thank you.