(Eingestellt am 18. Juli 2021, 23:26 Uhr von Kafkapharnaum)
So I worked a lot on a would-be “hard” puzzle that after testing was revealed to be a failure, but thankfully while I was struggling with it in my quest for the (quasi) perfect symmetrical construct, I came up with this – admittedly slanted – one, which not only I think should be good and fun, but which as it turns out I think is also pretty hard (coloring involved). In any case it's certainly quite a step up in difficulty from my previous two, so beginners beware :)

Now even though they didn’t actually test *this* one, I still would like to thank incredible solver Tilberg and wizard setter Filuta for their time on my failed one and for helping me figure some things on my own

- Arrows: digits along an arrow must sum to the number in the connected circle
- White dots: consecutive digits / Black dots: ratio of 1:2
- Palindrome: the digits along the bold gray line must read the same starting from either end. *THE SUM OF THE DIGITS ON THE PALINDROME IS 22* 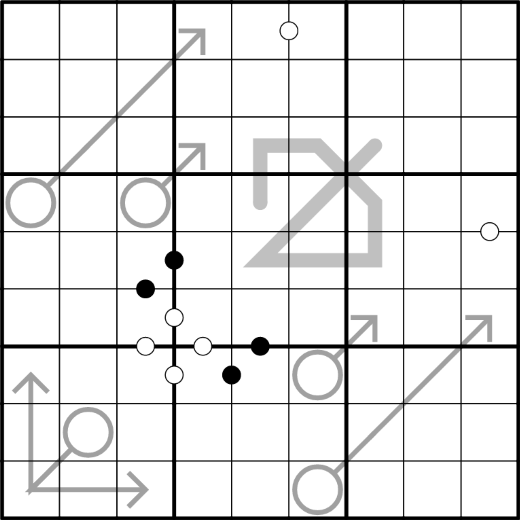 am 22. Juli 2021, 01:00 Uhr von smistry
Nice, thanks for setting. I found that it gets harder in the middle after the break in.
........
Thank you for your solve and comment! :D It does indeed get harder, and the fact is, it's because I had planned a different set of clues and an overall easier puzzle, but when I realized what I had and that it could be made into a harder one with little tweaking, and especially after my previous attempt failed, I decided to go with pretty much the minimum set of clues. I'm glad to hear you liked it!