Feng the sixth had lost his bike,his newly bought bike. He had just found himself a girlfriend, whom he promised a ride in the sunset on a brand new bike, the one bike he bought for this special occasion, the one bike that took him months of saving, the one bike that was stolen in its first parking day. (references to previous story, which is impossible to shown for somebody posted the de-story version.)

It just happened that the designer of the lost bike parking-lot is a master of mystery art. Every tile was painted 1-9 and there were no repeated numbers in every row or column. The tiles were separated by gutters, forming a 9 tiles region which also had no repeated tile number. There was a bar for parking between two consecutive tile numbers. As for the parking, the designer also designed the rule.

Every bike took three tiles to park. It’s licence number should math the tile number, reading from left to right, up to down.

The bike can’t park above the bar.

One of the tires(ends) must be locked in front of a bar. The other tire (end) should not faced a bar. In other words, the bike shouldn’t be squeezed into two bars but it still needed one bar in front of one end to lock the bike.

On the day of the grand theft bicycle, all 9 bikes were stolen. All the bikes parked according to regulation. These bikes’ licence numbers all had a different starting digit, middle digit and ending digit. The three digits in one licence can’t share a same parity. The GTB thief on that day was a good one. Not only did he steal all the bikes, but also all the bars. He even wiped out some floor paint to cover his crime.

The following layout is what the CSI restored from that day. Some tile number is still there. The parking place was recovered with the help of the bike owners. Can you restore the crime scene and fond where Feng’s bike was? 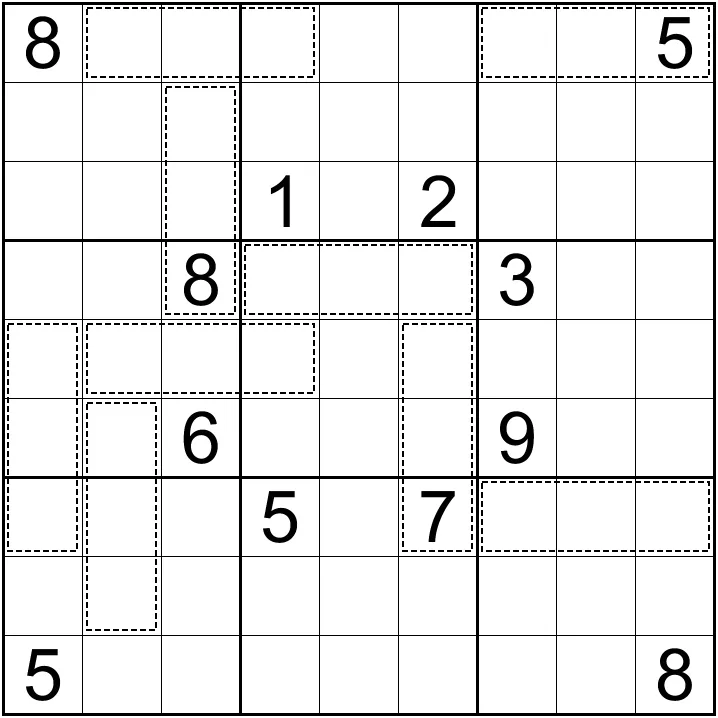 Lösungscode: the row and column where the licence number starts with a 1

am 6. Mai 2021, 09:14 Uhr von bigger
There are a lot of missing story in between. Some of them are too long to translate, which would challenge the length of one puzzle. But somebody post those before me. I hate to see a reader digest of something we enjoy.
If you check the wechat site I post, you would found there were actually prizes on the line. I got one. It's also the first time that the second place also had a prize. Borescoper is kind of a collection nerd, so there are more prizes in the later puzzles.