Place the nine pentominoes on the grid to satisfy the following conditions:

1. Every pentomino contains the numbers 2, 4, 5, and one of the other nine numbers which are already placed. The fifth number in each pentomino is already in the pentomino in the exact position it appears. Pentominoes can be reflected and rotated, they must not contain repeated digits. Similarly shaped pentominoes do not need to contain the same numbers or same arrangement.

2. All the pentominoes form a single orthogonally connected region. Touching pentominoes must not form loops or 2x2 areas.

3. Starting on the 2 already placed on the grid, there is a unique path visiting all the 2s on the grid exactly once, in which each two is separated by a two orthogonal or diagonal steps, similar to taxicab rules (see below for an example). The same is true for the 4s and 5s, separated by four and five adjacent cells respectively.

Link to puzzle on Penpa: https://mub.me/malN 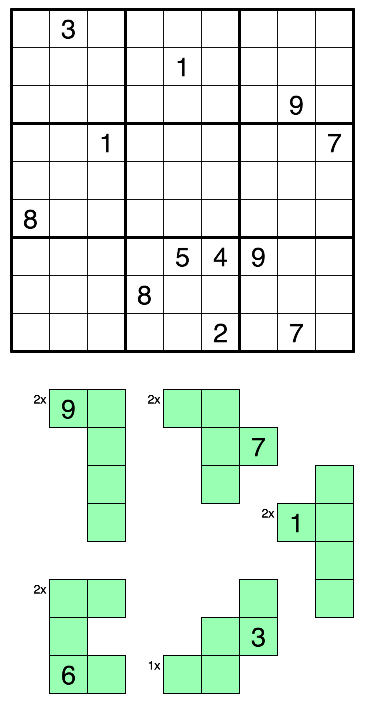 Shown are all the cells the two could jump to from this 2, though some of those spaces would not be allowed by sudoku rules. Note the two examples with the 4s; the 4 to the left is allowed as a jump because it is four adjacent cells away, but the upper 4 is not allowed because it could be reached in three adjacent cells.

What is the weird rule set all about you ask?

The sudoku is a garden pond, teeming with life! The pentominoes are lily-pads. The path from the 7 to the 8 is the path across the lily-pads used by ladybugs to get from the bank to a tasty flower. The path has to be simple with no loops or they'd get confused! And the 2s, 4s, and 5s paths are three frogs hopping from lily-pad to lily-pad to gobble up the ladybugs.

Lösungscode: The solution code is all the cells in row 1, followed by row 4, totaling 18 digits (no spaces).