Rules:
Place a single 'treasure' cell into the grid along with some numbered 'clues' that show their distance from the treasure. (Orthogonal steps)

Numbers outside the grid are the sum of all the clues found in that row/column.

Clues may not be next to each other. (even diagonally) 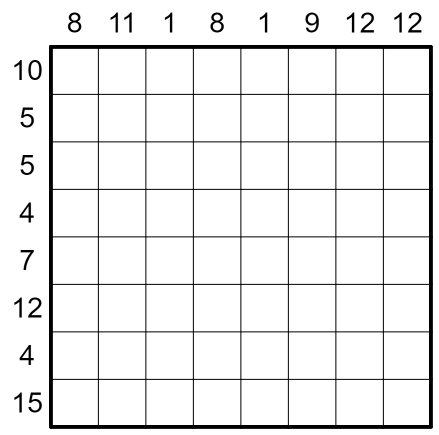 
Hint:
Highlight the white text below for some hints on how to approach this puzzle:
[HINT]
1. Small clues must be close to the treasure, which lets you to eliminate some rows and columns that are too far away.
2a. Since clues can't touch each other the maximum number of clues that can be added to the grid is quite limited. Notably there is a Maximum of 1 clue in any 2x2 region. (Just like in StarBattles)
2b. Since this puzzle is 8x8 that means there is a maximum of 4 clues in any pair of adjacent rows or columns. [/HINT]

Backstory:
After making several Treasure Maps Sudokus and Treasure Maps Pythons I wondered, "what would a Treasure Map puzzle be if it was a stand alone puzzle, instead of just a variant for another puzzle type?". My first attempts were far too simple but eventually this is what I came up with. It is a bit inverted since you have to place the clues instead of having them given, but the logic seems to work pretty well so I will be releasing several more puzzles with this rule set.

I would also like to create a proper German Tag for this puzzle type, along with my prior variants that have the common theme of counting distances from hidden cells. Google Translate suggested "Schatzkarte", but I don't know if that is correct.

Lösungscode: Enter all clues in the order they appear (each row, reading left to right)
(Example puzzle: 75542322)

am 9. Februar 2021, 19:29 Uhr von Rollo
The new tag for a new type is ok, but I think you can also set the tag taxicab, because there are allready some puzzle of this type, even not sudoku.

am 8. Februar 2021, 20:54 Uhr von CHalb
Great! I didn't follow the Sudokus and other puzzles with this concept. In this pure form I see a potential and - at least for me - new puzzle type in it. I'm not sure about how difficult these puzzles could be made. I hope we will explore this further.

IMHO it doesn't matter if the tag is in English, German or Japanese. But we should have one term in the end, which is used by everyone. So you set it as 'Schatzkarte' (or 'treasure map'). And the followers should use it, too.