(Eingestellt am 22. September 2020, 15:36 Uhr von Genomico)
This is one large puzzle, consisting of six different 6x6 puzzle variants, which are all linked by a pathway that travels through all puzzles.

Doppelblock: Fill the grid with colored cells and digits from 1 to 4, so that each row and column contains each digit exactly once as well as two colored cells. The numbers outside the grid indicate the sum of the digits between the two colored cells in the respective row or column.

Pathway: Color some cells and draw a single closed loop through all remaining white cells. The loop travels horizontally and vertically and doesn't cross or overlap itself. Clues outside the grid indicate the number of colored cells in the corresponding row or column. Colored cells may touch each other orthogonally.

Japanese sums: Enter digits from 1 to 4 into the grid, so that each digit appears at most once in each row and column, and color the remaining cells. The numbers outside the grid describe the contents of the respective row or column. Each number corresponds to a contiguous group of digits (possibly a single digit) and indicates the sum of these digits. Two such groups are separated by one or more colored cells. The numbers outside are shown in correct order.

Odd snake sudoku: Place the digits 1-6 in every row, column and 2x3-block. Color a one cell wide snake in the grid that travels through cells with odd digits. The snake is not allowed to touch itself, not even diagonally. The complete snake is part of the big pathway. It is possible that some cells with odd digits are not part of the big pathway, but they may not touch the snake/pathway, not even diagonally.

Snake: Color a one cell wide snake in the grid. The snake is not allowed to touch itself, not even diagonally. The numbers outside the grid indicate the number of cells occupied by the snake in the respective row or column. The complete snake is part of the big pathway.

Below on the left a 4x4x4 example. The example on the right is to illustrate that colored cells (either part of the big partway or not) cannot touch the big pathway even across puzzle borders. So when the big pathway follows the green cells, the red cells cannot be colored. 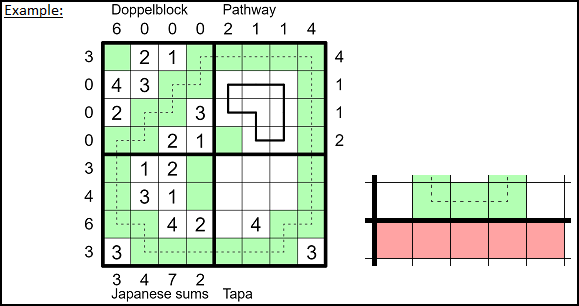 And here the puzzle. Enjoy solving! :) 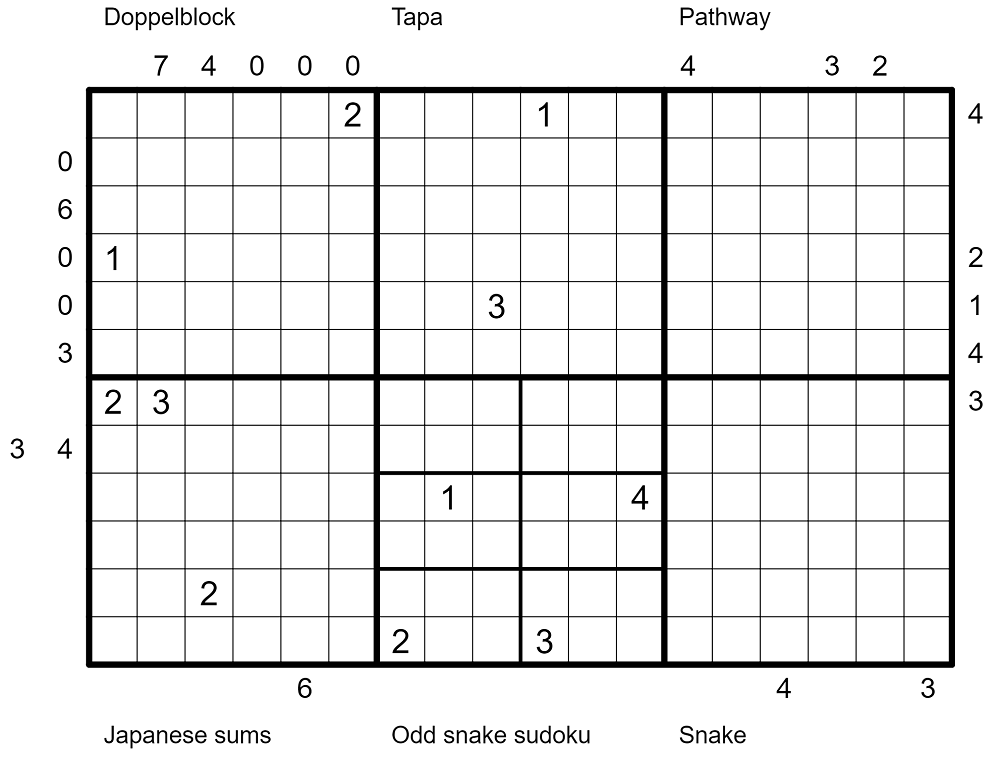 am 23. September 2020, 12:58 Uhr von MagnusJosefsson
Very nice and interesting. A lot of the logic was new to me. In particular, the odd snake sudoku concept really took some patience to get the hang of.