(Eingestellt am 17. September 2020, 00:51 Uhr von Genomico)
This is one large puzzle, consisting of six different 6x6 puzzle variants, which are all linked together by circles.
A circle must contain a number and is an outside clue for both adjacent puzzles.

Pathway: Shade some cells black and draw a single closed loop through all remaining white cells. The loop travels horizontally and vertically and doesn't cross or overlap itself. Clues outside the grid indicate the number of blackened cells in the corresponding row or column. Black cells may touch each other orthogonally. The given line that connects two cell centers must be part of the loop.

Battleships: Place the given fleet in the grid, with every ship segment filling a single cell. Ships are placed horizontally or vertically, and do not touch each other, not even diagonally. Two ship segments are already given. Cells with water remain empty. Clues outside the grid indicate how many cells are occupied by ship segments.

Doppelblock: Fill the grid with black cells and digits from 1 to 4, so that each row and column contains each digit exactly once as well as two black cells. The numbers outside the grid indicate the sum of the digits between the two black cells in the respective row or column. One black cell is already given.

Snake: Draw a one cell wide snake in the grid. The snake is not allowed to touch itself, not even diagonally. The head and the tail of the snake are given in grey. The numbers outside the grid indicate the number of cells occupied by the snake in the respective row or column.

First seen odd/even Sudoku: Place the digits 1-6 in every row, column and 2x3-block. Clues outside the grid, if odd, show the first odd number in the corresponding direction; or, if even, the first even number.

Skyscrapers: Place the digits 1-6 in every row and column. Each digit represents a skyscraper of the corresponding height. Numbers outside the grid indicate how many skyscrapers are visible when looking from that direction. Larger skyscrapers block the view of smaller ones.

If you struggle solving this puzzle, find two hints here. But try it yourself first of course ;) Enjoy solving! :) 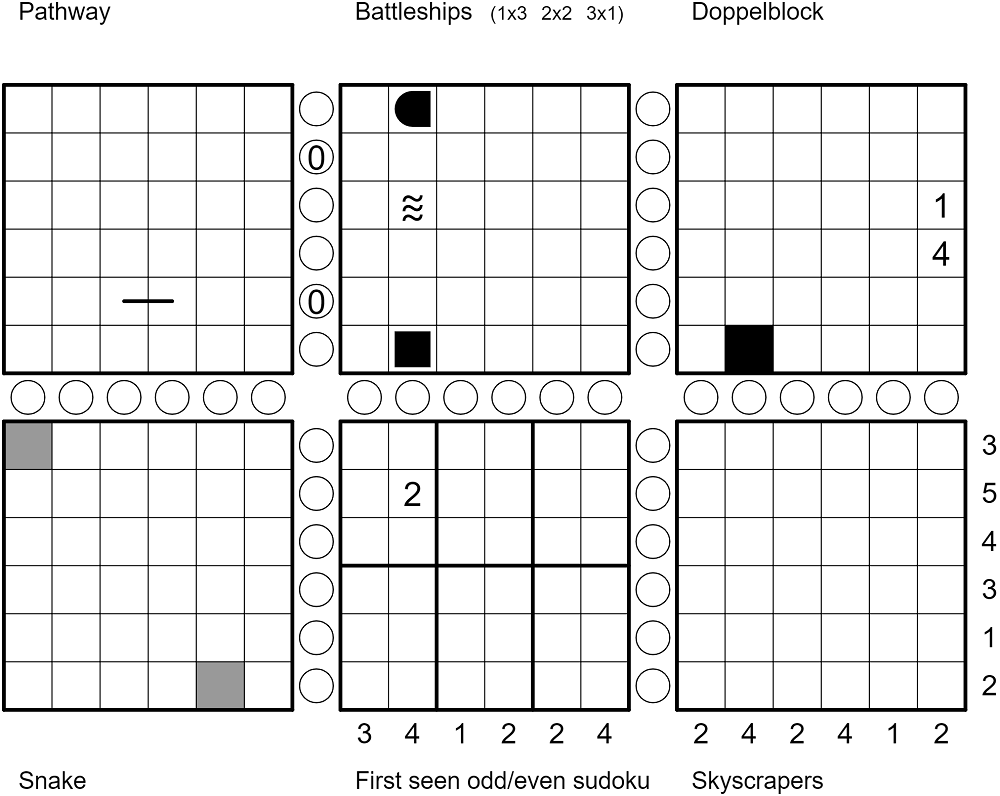 Unfortunately it has a Sudoku tag, so I almost missed it...

Reply: I'm happy that, despite the puzzle contains a Sudoku part, you liked it and managed to complete it :)

Dandelo: Oh, I solve Sudokus, too. From time to time I open the list and select some promising ones. But here the Sudoku type is nice and the Sudoku part is not too large.

am 17. September 2020, 11:20 Uhr von MagnusJosefsson
Superb! Such variety and every section of the puzzle is interesting. Great job putting all of this together so well!

am 17. September 2020, 02:37 Uhr von Greg
Another fantastic Genomico puzzle. Loved that you managed to mix Sudoku with other logic puzzles but still have them share the clues.