(Eingestellt am 8. September 2020, 01:34 Uhr von Genomico)
This is one large puzzle, consisting of four different variants of 6x6 sudokus, which are all linked together by the grey cells.

Normal 6x6 sudoku rules apply to all sudokus, so every row column and region must contain the digits 1 to 6.

Additional rules per variant:
Anti-knight: Cells that are a (chess) knight's step away from each other may not contain the same digit.
Non-consecutive: Any two orthogonally adjacent cells cannot contain consecutive digits.
No three odd/even in line: The maximum number of neighbouring odd digits as well as the maximum number of neighbouring even digits in any row or column is two.
Non-average: The number in a cell cannot equal the average of its two horizontal neighbours nor it equals the average of its two vertical neighbours. 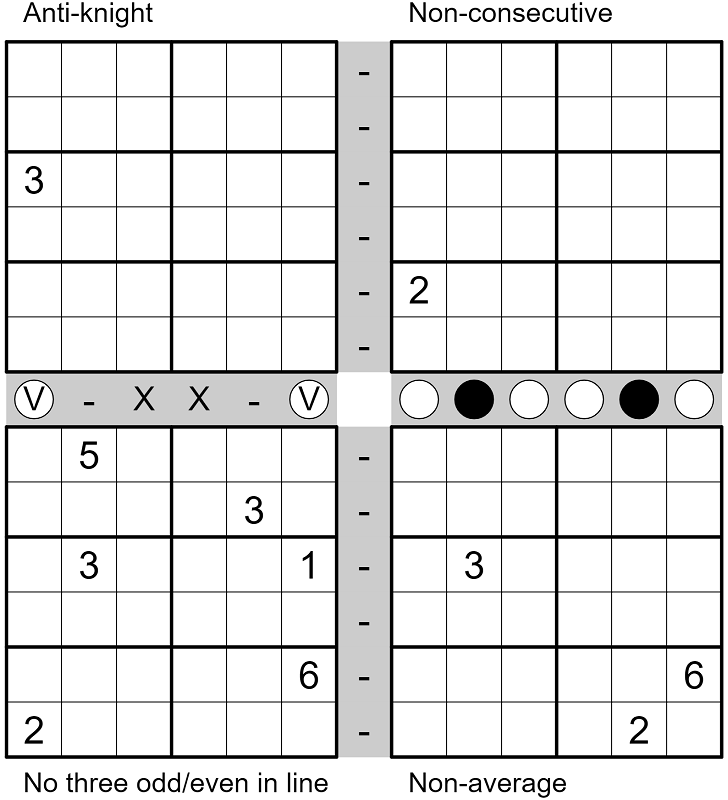 @cam: No need to wait any longer, the next linked sudoku is published already ;)

EDIT: @Genomico I'm not sure where I went wrong last time, but this time I managed to solve this quite smoothly. Quite a beautiful and satisfying puzzle :)

am 8. September 2020, 04:38 Uhr von bosjo
Very nice puzzle! In my opinion, this is slightly easier than the six-pack, if nothing else because it is easier to decide where to attack since it is smaller...