1. Planets (numbered black circles) are the centers of point-symmetric galaxies (orthogonally connected regions of cells). All non-moon cells must belong to exactly one galaxy and cells containing a moon do not belong to a galaxy. Galaxies cannot overlap.

2. Planets double as Hashi clues. The numbers on each planet show the number of highways connected to that planet. Moons must be connected to exactly one highway. The whole grid must be interconnected through highways.

5. Every cell must be visited by at least one and at most two highways. 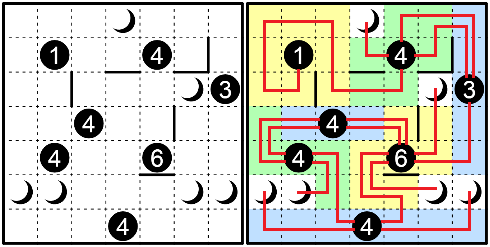 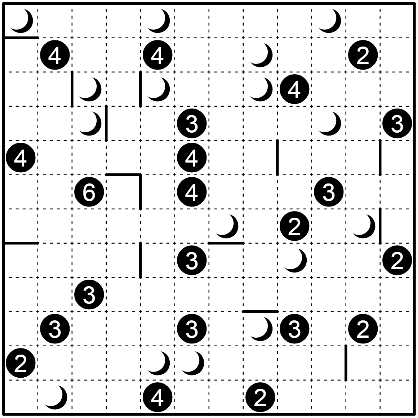 This puzzle was inspired by shye who came up with this ruleset and made a puzzle with it. I liked it very much so I tried to make my own puzzle and felt it was good enough to post here.

am 9. September 2020, 08:43 Uhr von Dandelo
The example and the word hashi suggest that two highways cannot cross each other. But it is not said in the rules. Is it possible to cross?

From stefliew: No, highways cannot cross each other. Thanks for pointing out a loophole in the rules.

am 24. August 2020, 03:44 Uhr von stefliew
I wish I could condense the rules but I don't know how to do that without losing clarity. A lot of it is common sense, but there are some people with uncommon sense who like to do weird things. Since I can't condense the rules, I've done the next best thing and highlighted the important bits you need to get started.

am 23. August 2020, 20:31 Uhr von shye
beautiful solve path, takes the logic of both the spiral galaxies and the hashi so much further than i'd explored in the first one, loved it :D

am 23. August 2020, 20:02 Uhr von Jesper
Very enjoyable! I really like these puzzles (both this one and shye's). The rules may seem long at first glance, but they don't feel complicated once you start using them.