Akari: the given digits on gray squares give the number of Akari lights orthogonally adjecent to it. Light bulbs illuminate all cells in horizontal and vertical lines till a shaded cell or the edge of the grid. Light bulbs cannot illuminate each other. All white squares need to be illuminated.

Liar Numbers: The clues in the white squares are liar numbers, the difference between the given and the number in the final solution is equal to the distance to the closest light that illuminates it.

To clarify, the Akari clues give you no information about the digit in that square in the final solution. 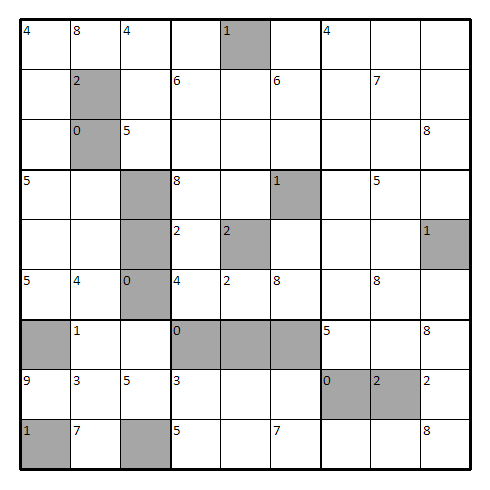 As an example of the rules, in the following example puzzle R1C1 has a 3 as the given, since the closest light that sees it is 2 squares away the number in the final solution is 1. R1C3 has a 3 that is on a light, so the difference between the given and the final digit is 0.

am 10. August 2020, 21:56 Uhr von MartinR
Really nice mix of akari, suduko and liar logic, which are all neatly intertwined,

am 10. August 2020, 12:30 Uhr von Ringo
I wanted to try and create a new way to combine sudoku with akari, so I created this puzzle where the akari lights influence liar numbers. visually it looks very busy, which I don't really like, but I'm quite happy with the way the logic works.
I also created a version without givens in the gray sqaures which helps with the look of it and is also a bit more difficult, I will upload that one later this week