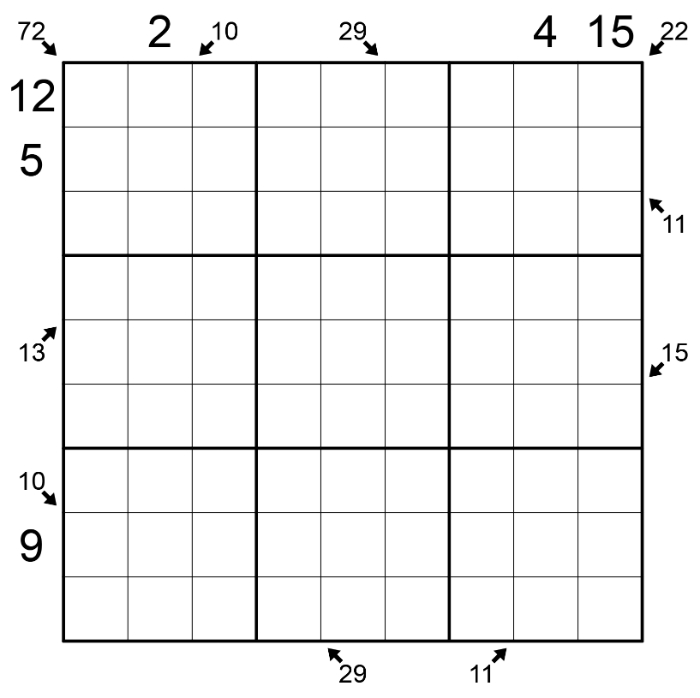 For this Battle, Archers are in position to fire as well. Numbers by each arrow are the sum of the digits along the diagonals indicated by the arrows. Digits may repeat along diagonals. (You may know Archers better as Little Killer Cages.)

Setter's Diary :: July 28, 2020 :: As the Battlefield spreads among a handful of enthusiastic setters, I return to it myself with the inclusion of "archers", which I figured was the best symbolism to associate with the arrows of Little Killer Cages.

am 3. August 2020, 08:58 Uhr von Realshaggy
I don’t think that will be well received. Existing puzzles shouldn‘t be changed unless there is an error imho. At least it was handled that way in the last 12 years.

*** Oh, I meant actually removing this entry - deleting it. I wouldn't just replace the image above without creating an entire new puzzle page.

am 3. August 2020, 08:29 Uhr von Big Tiger
Given the increased abundance of puzzles on the site, I'm mulling scrapping this one and replacing it with a version more challenging. Thoughts on that?

am 28. Juli 2020, 21:26 Uhr von henrypijames
Clarification again: So the little killers are classic? They even include green cells, i. e. cells that are gaps both in row and column?

BTW, I don't think creative storytelling needs to be avoided to eliminate ambiguity. Using precise words is also good, but it's not the most powerful tool against ambiguity - redundancy is. When in doubt, say the same thing in two or three different ways. That's what makes legalese the way it is - it's full of redundancy to eliminate ambiguity. I believe many puzzle description on this site could benefit from additional redundancy in the explanation of their rules.

*** No, I don't plan to avoid storytelling in the future. But in my initial instructions, I called the damage done by the archers "casualties", which first caused Stephane to think that they would operate like the normal armies: firing from each end. So that one was easy enough to simply write out of the instructions to avoid confusion. :-)

am 28. Juli 2020, 21:20 Uhr von Yohann
At first I thought the little killers would be battlefield clues, then I had the same idea as stephane. I was so wrong XD. I should stop toying with variable-length battlefields. Nice one anyway

*** Well, you seem to have solved it rather quickly anyway, lol. Was it my instructions? - I did a re-write just to make it clear the arrows were Little Killers, plain and simple...

*** Nope. I simply noticed it wouldn't work. They had to be standard

am 28. Juli 2020, 20:50 Uhr von Big Tiger
Dropping "casualties" from the description of Archers to avoid confusion that it should be deduced the same way as the rows and columns. That's what I get for trying to infuse creative storytelling into every aspect, ha ha.

am 28. Juli 2020, 20:48 Uhr von henrypijames
Clarification on the little killers: Green cells obviously don't count; but do red cells count just once or twice? Because when you say "total casualties in the direction of each respective arrow", the word "total" suggests double counting a red cell for both its casualty value in the row and in the column.

*** I was working on clarifying that even as you were writing. :-D I have considered some kind of version where the casualties inflicted by the Archers are subtracted from the possible casualties by the row/column armies but I haven't yet made myself sit down and suffer through creating such a puzzle, ha ha.

am 28. Juli 2020, 20:42 Uhr von stephane.bura
Use the 8-way arrows.
When reading the rules, I thought the archers summed the actual casualties (overlap cells in their diagonal). That would be a neat idea to explore, maybe.

*** I may try that out someday, but I wasn't in the mood to hurt my brain today, ha ha. And thank you, when I get back from my short vacation I will look at the 8-way arrows on Penpa!