(Eingestellt am 26. Juli 2020, 15:06 Uhr von CannyK9)
Hello! This is my first attempt designing a Sudoku puzzle. I was worried about stacking up against established designers, so I invented a variant (as far as I'm aware). I'm not sure what to call it. Perhaps 'Arete', 'Perspective' or 'Sideways' Sudoku would work?

Due to some narrative flair around the killer constraint, I thought Oubliette Sudoku would be a good name for this particular puzzle.

2) The 'Arete' constraint requires some conceptualisation, so I made a little 3D render. Imagine some of the 3x3 zones have risen up out of the grid, so you can also see the cell values on the sides. 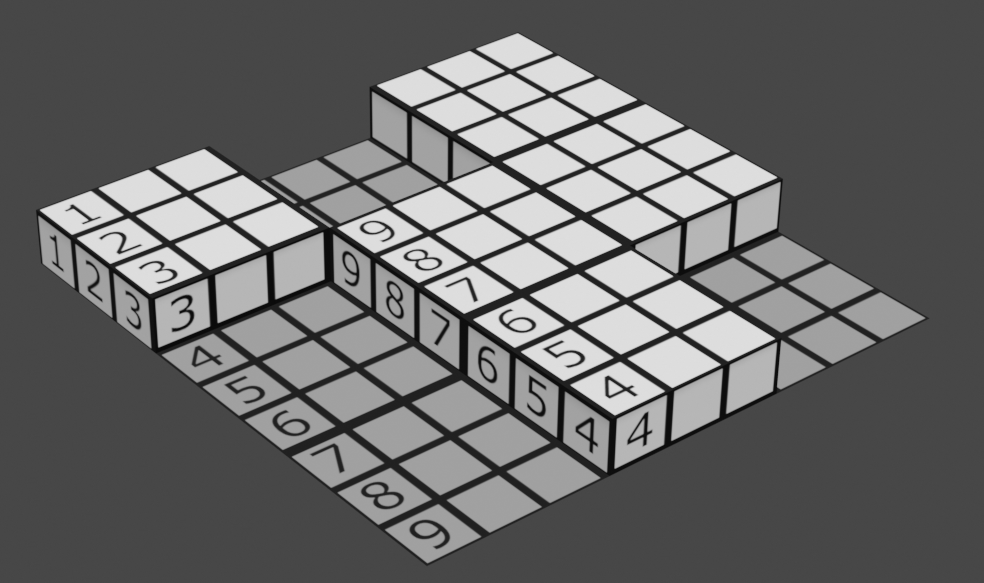 When viewing from all four sides, the completed puzzle must show the numbers 1-9 along each side.

As shown in the diagram below, at least one zone in each row and each column must be raised, but you cannot raise all three zones in a row or column (flat cells are highlighted grey, but the highlighting is interchangeable):

3) The killer cage constraint has a twist.

The zones that are flat (trapped in the oubliette) are bound by their cages and follow standard rules. The sum of values in a cage in a flat zone must be equal to the number in the top-left of the cage.

The zones that have risen have broken free of their cages. The sum of values in a cage in a risen zone must equal exactly 1 more than the number in the top-left of the cage. This means the solving software will end up displaying some errors, but at least it's thematic.


As a relatively inexperienced solver, I'm aware that there may be logic that bypasses my constraints, though I couldn't spot any myself. I rated it hard, but that might just be because it's unusual. If you're twisting and tilting your neck it means you're doing it right!

I hope it's just bizarre enough to be fun, and I'd be overjoyed if someone more experienced decided to use the constraint themselves, as I'd love to see what other possibilities is may have.

Happy solving! Here's a link to the puzzle on f-puzzles. 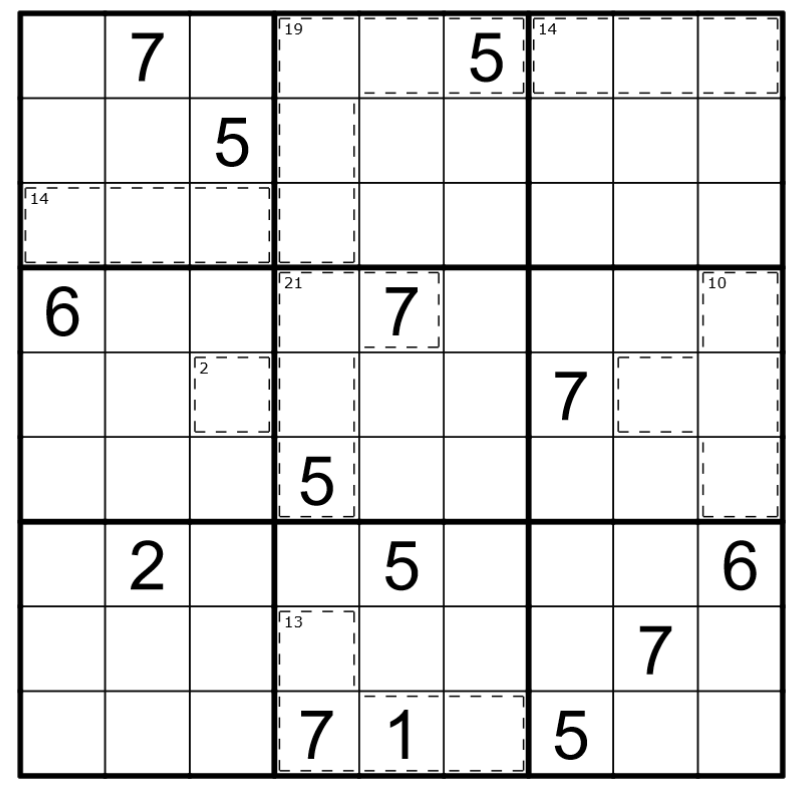 Lösungscode: Column 1 and Column 9 with no spaces between

am 28. Juli 2020, 23:49 Uhr von CannyK9
I'm happy to agree with you, it does require a few steps to rule things out, and I think this comes down to a difference in experience.

I'm very new to these puzzles, so when I've encountered bifurcation it has usually been my own failure to spot something, so I randomly assign a value and see where it takes me, often nowhere informative. But that feels different from thinking through 'can that be a 5? how about an 8?' until something fits.

So I was really pleased with how this puzzle manages to have specific tasks to focus on, and just barely manages to rule out incorrect paths without requiring the solver to guess two things at once (randomly assigning two zones and seeing what happens). I haven't yet encountered a puzzle that hasn't involved ruling something out a few steps ahead, so I took that as a win!

So yes, I'm thinking qualitative, as the configuration of zones feels like a much bigger deal to me than standard sudoku logic, so much that I didn't factor it in at all. In my defense, I did intend for example for the central zone to be determined merely by the pencil markings, but the concept is too complicated for it's own good and I only later realised that the neighboring zones keep it ambiguous. If I try it again, I'll watch out for that next time. Thanks very much for your comments!

am 28. Juli 2020, 22:55 Uhr von henrypijames
Thank you for providing the solution path in such detail, I really appreciate it.

However, I have to contend that it is in fact not a "logical path" in the way that phrase is commonly used in regard to puzzles. On the face of it, all paths are logical, even ones involving try and error or guessing. But when people refer to the "logical path" of a puzzle, they mean "without bifurcation". The solution path you've provided involves bifurcation (i. e. try and error) at several junctures (for instance, the steps involved in the third screenshot).

Of course, there is no commonly accepted definition of what constitutes bifurcation, but I think it's safe to say that any sub-path that requires more than 10 steps of deduction before a contradiction is found must be considered bifurcation (and some maintain a much broader definition), because no normal (i. e. below competition-level) solver can be expected to do that in their head (without writing anything down).

Once you do allow for bifurcation, the floodgate is open - it no longer matters how often and how long a bifurcated sub-path is. I solved this puzzle using a different path - it might have been longer than what you've described (and I'm not even so sure about that), but the difference is quantitative, not qualitative.

am 28. Juli 2020, 16:23 Uhr von CannyK9
I've made a guide for the logical path up until all the raised/flat configuration is deduced. I'll admit it took a long while to re-engineer my original logic, it was a lot easier when I could jump straight to the answer! Apologies if it's tough to follow:

And thanks very much for the feedback. I can imagine how an easier puzzle might look, just stating the nature of the zones for one thing, so I might put one together and refer it back to this. Will take some time to find a viable configuration.

am 27. Juli 2020, 18:02 Uhr von henrypijames
It's not off-putting - it's just hard. If you really want your puzzles to be popular (some creators are not concerned about that, and that's totally fine; other are, and that's completely understandable too), I'd suggest when you create a new variant, make your first puzzle not too hard (maybe 3 stars), so people can learned about the logic behind the ruleset. Once they've familiarized themselves with it, you can raise the difficulty in subsequent puzzles. If you look around in this forum, you can see a number of creators deliberately applying this approach with their new variants. It's basically the drug dealer's modus operandi: First hit is free, then you get hooked. :)

am 27. Juli 2020, 17:28 Uhr von CannyK9
That sounds like the intuitive approach, and it's why I went with highlighting only the flat zones.

Although saying that there's a few more tricks to it, because you can't just compare zones and choose which to lower, but you also have to look at what happens when some zones are lowered and think about how to 'block' a conflict by putting a raised zone in the way. Hopefully that helps a bit!

The puzzle hasn't gotten much traction (thanks Amedoru for the first solve, or I'd be really worried~), perhaps because the first piece of logic requires engaging with the weird concept and it's immediately off-putting. You first need to find the zone with the most constraints and decide whether it's possible that it's either raised or flat. Once you're passed that I swear the concept itself leads to some pretty fun discoveries!

am 27. Juli 2020, 16:37 Uhr von henrypijames
I understand the rules but have a hard time enumerating and summarizing their consequences into usable tactics. For starters, I believe thinking all boxes as raised in their initial state and considering which one to lower might be a better way to visualize things in my mind.