In this new variant, there are four competitions occurring at once. They might be concerts, races, cage-fights, basketweaving contests... I don't know... It doesn't really matter. What matters is that there are "participants" in the boxes, and "fans" outside of the boxes.

A fan is "bored" if there isn't anyone in the bowl next to him with a matching number to watch. A fan is interested if there is at least one number in the cage to watch. A fan is "excited" if they have a seat directly next to a matching participant (diagonally adjacent). Fans in the middle row and column may perhaps be interested, or possibly even excited about multiple matches. 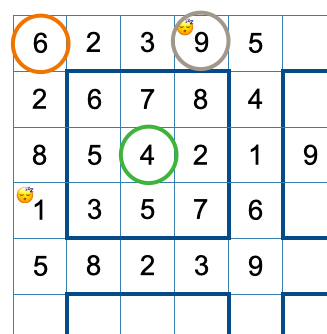 Place the numbers 1-9 in the rows and columns so that each digit occurs in each row and column. Note that unlike regular sudoku, numbers can repeat within the competitions (so R2C2 and R3C3 could be the same number).

In this specific puzzle, all of the following that meet the criteria are shown, and nothing else was given (Therefore there are definitely negative constraints by what's not given.): 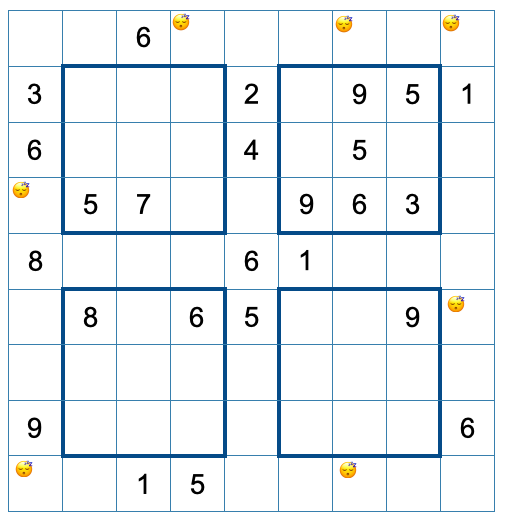 Lösungscode: The sleeping fans clockwise around the outside starting at the top left.

am 26. Juli 2020, 00:25 Uhr von bob
A challenge for me keeping all of the positive and negative constraints in mind but a really neat concept. I actually visualize the digits "cheering" each other on. And I agree with not calling it a sudoku...it was tempting to inadvertently put sudoku restrictions on the 3 x 3 boxes (fishbowls). Fortunately the givens included some repeated digits to remind me. Maybe just call it Fishbowls or Arenas.

am 9. Juli 2020, 09:21 Uhr von cam
Nice puzzle! I usually don't like these with such complex rules sets, but this one was pretty fun. I was a bit shaky going in because I wasn't sure if a fan had to be diagonal to a participant. I went with it and soon realized that this must be the case.

am 8. Juli 2020, 20:49 Uhr von henrypijames
I was wondering whether this puzzle qualifies as sudoku - and after looking up the definition in various sources, I think it doesn't. Instead, it's just a Latin Square (non-repeating digits in each row and column), because a Sudoku, in addition to being a Latin Square, also has to be divided into regions (usually square, but sometimes irregular) containing the complete and non-repeating set of digits. This puzzle doesn't have that.

Reply: Sorry, but I'm not sure "Fish Bowl Latin Square" has the same ring to it.

@RockyRoer: How about Latin Dance Square? The participants can be Latin dancers in a dance square.

am 7. Juli 2020, 19:20 Uhr von henrypijames
Very interesting, the constraints works well with (against) each other.

Reply: I thought so too. This first puzzle was more of an exploration of the constraints. These relatively simple constraints could definitely be pushed harder in setting to lead to more logic and less givens in future puzzles.