Normal sudoku rules apply. Digits along a thermometer must increase from the bulb end and do not need to be consecutive.

The grid is further separated into 4 concentric rings as indicated by the dotted lines. These rings form the orbits of various comets circling a black hole in the grid’s central cell. Comets are represented as thermometers with the bulb end being the head of the comet. All comets must be positioned such that they appear to be orbiting the black hole in a clockwise direction of rotation (i.e. always making right turns at the corners). Comets placed in an orbit must stay within that orbit and will not cross over into other ones.

The dotted orbit grid also provides a snapshot of the comets’ movement inward toward the black hole. Comets in a given orbital ring “X” can possibly appear in closer orbits, but in an altered form. As comets move closer to the central black hole, the increased gravitational force will break comets into pieces forming new smaller comets that are in the orbits closer to the center.

Comets break according to the following set of rules:

1) Comets whose length is 4 or more cells will break into two or more pieces with each piece having a minimum length of 2 cells. The combined length of all the pieces after the break must be equal to the size of the starting comet.

2) Comets whose length is 3 cells will lose one cell to produce a 2 cell comet.

3) Comets whose length is only 2 cells totally disintegrate and will not exist in the closer orbits. The 2 digits that made up this comet may appear adjacent to one another within a closer orbit, but they would need to be ordered in such a manner to avoid recreating the comet.

4) If the comet breaks into pieces that are not symmetric in size, the larger pieces must contain the larger digits. This rule also applies to the breaking of 3-cell comets which lose their smallest digit so that the 2-cells remaining contain the two larger digits of the starting three.

5) The sequence of digits that was in the original comet is always maintained in any surviving comet pieces.


Here is an example grid to illustrate these rules.

In the innermost orbit, there are only two pieces of the comet left: the 2-cell comets {4-5} and {6-7} which resulted from the breaking of the 4-cell comet in the previous orbit. The {1-3} comet no longer exists. This is the only possibility that can result from the 4-cell, 2-cell break found in the middle orbit. 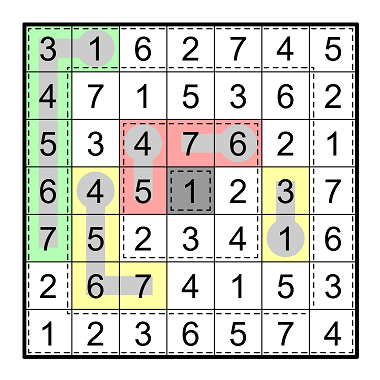 In the innermost orbit there is only one 2-cell comet. This is the last remaining piece of a larger comet that exists in the outmost orbit. The form of this comet across all the other orbits needs to be deduced through solving the puzzle. None of the other comets already provided in the grid are part of this comet's transition from large to small.

To clarify that the 2-cell comet is the only comet located in the innermost orbit, there is a counterclockwise thermometer placed in all the other cells of the orbit. This thermometer is not a valid comet, but the regular thermometer rules still apply.

Thanks very much for trying the puzzle and I very much appreciate any feedback. 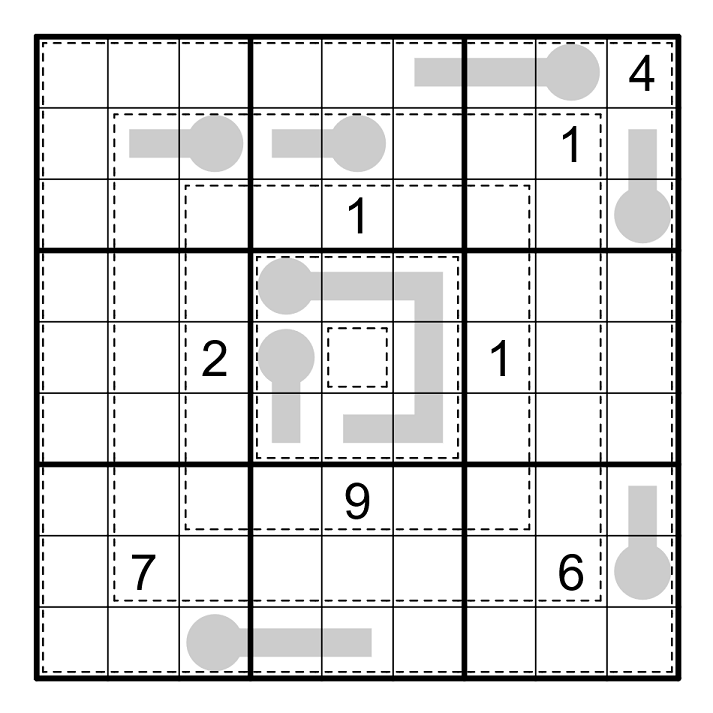 am 5. Juli 2020, 02:11 Uhr von Aporion
@henrypijames. Thanks so much for the feedback after attempting and solving the puzzle. In the construction, I was considering a mass correspondence to the digit values where it would have made better conceptual sense to use backward thermometers as you mention. But I decided to just use the regular thermometer rules to be remove that additional complexity. So in this case the individual digits are just digits and do not represent anything about size. For the breaking of the 3-cell comets, I visualized it less like the tail falling off and more like the core fracturing with a piece of it spinning off.

Regarding the solve path, yes I believe there are some logical deductions that can be made early on that would make bifurcating to that extent unnecessary. If you are interested, I would be happy to discuss in a hidden comment.

am 4. Juli 2020, 20:27 Uhr von henrypijames
Is this puzzle really solvable without bifurcation? I had to try all possible placements of the hidden comet on the 7...6 orbit, and each took a long while (more than 10 digits and 20 pencil-marked cells) before a contradiction was found (except the last option, which turned out to be the right one).

am 4. Juli 2020, 15:17 Uhr von henrypijames
For the comet metaphor to work visually and thematically, you need to invert the termo - making it decrease from the bulb end (and turning all termos around). Otherwise the smallest, lightest digit represents the comet's core, and the larger, heavier digits its tail? And when a three-cell comet degrades it looses its core, but the tail alone upgrades itself to a new comet?

am 3. Juli 2020, 23:11 Uhr von Prongs
Just to clarify, when three cell comets lose a cell, do they compulsorily lose the smallest value, or can they lose any value?

am 2. Juli 2020, 09:58 Uhr von Prongs
Just to clarify, when three cell comets lose a cell, do they compulsorily lose the smallest value, or can they lose any value?

Yes. When a 3-cell comet loses a cell it will always be the smallest digit so that the larger piece after breaking (the 2-cell piece left over) will contain the largest digits.

Yes. Thanks for pointing that out.