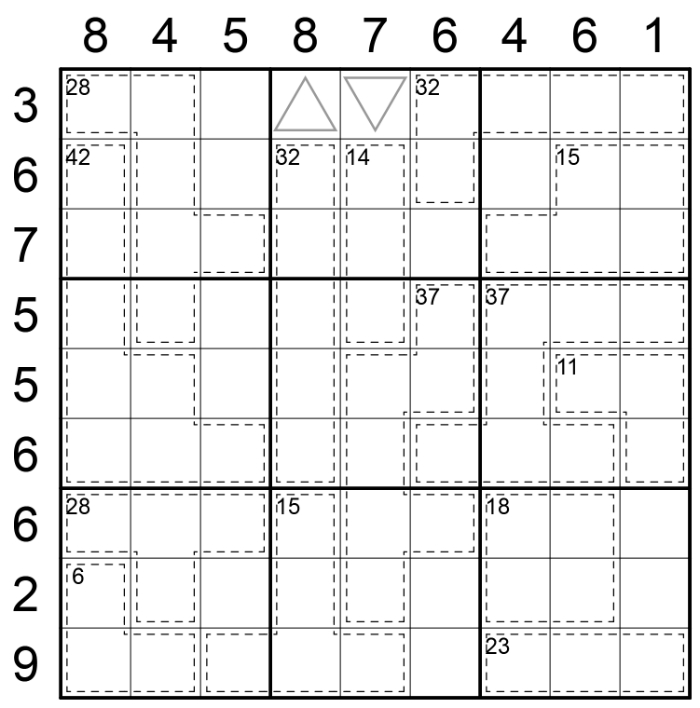 A Snake leaves the Viper's Den Pub late one night. He starts by traveling orthogonally, and heading directly south from the front steps (the Down arrow at the top of column 5). The number on that square indicates how many squares he travels, after which he must turn and travel the number of squares indicated at each new turning point. So far, so good.

But this snake has had a little too much to drink. When he tries to turn, in his stupor he switches from traveling orthogonally to traveling diagonally. After he has traveled the given number of squares, he then switches back to traveling orthogonally, and so on back and forth until he reaches a point where he can travel directly north the number of squares needed to land him at his lair (the Up arrow at the top of column 4), which, being next door to the pub, would have been so easy if he had just been sober.

Unlike most other snakes, this hammered fellow can cross his own path, touch or border squares previously used, and make a turn on a square also used for a line of travel. What he cannot do is travel in the same orientation along the same square twice, or make more than one turn in any square.

Side Numbers indicate how many squares in that row or column the snake uses in his inebriated excursion. The squares with the two arrows are counted as part of the Snake's path.

Cages on the grid must not repeat any digits, and must add up to the total in the upper left corner. Every turn the snake makes is within a cage, and each cage contains exactly one such turning point. 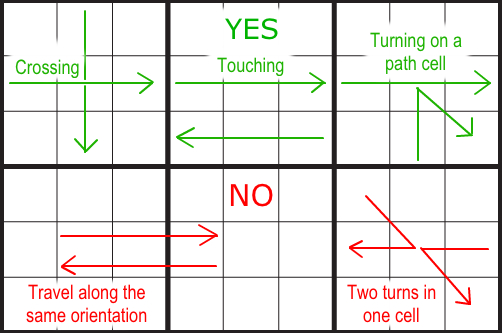 If you find this puzzle to be a head-scratcher, try my Solve video to get some insights and some helps.

Setter's Diary :: June 30, 2020 :: It was time to step away from the Battlefields again and not take things too seriously. This is a variant of the Snake idea that was bouncing around in my head for a while. For those who just want something a little different, a little wacky, I hope you enjoy.

If you don't feel like tracking the Snake's route, you might try solving it just as a Killer Sudoku, but I cannot testify to whether that is possible. I gave up trying after an hour. For my skill level, the Snake's path definitely revealed some important digits.

am 29. September 2020, 22:14 Uhr von DiMono
I did a bunch of regular killer stuff at the bottom, and then got stuck, because I didn't understand how to use the snake. Then I peeked at your video, saw how to use it, and proceeded to finish the puzzle without further video help. And felt a little silly for not looking at the snake sooner.

I think once you understand the rules well, it's probably not a brutally difficult puzzle, but for the time when I didn't I spent a lot of time staring at the cages doing math and getting nowhere. It was a lot of fun either way, and I'm glad I took it down.

In your video, you said that you created it by having a random Sudoku solution, filled in a snake, then calculated the givens, and finally checked if it's uniquely solvable. If that would be true, you would be extremely lucky. Because it feels like a really well-crafted puzzle. :)

*** You should see the amount of paper I throw away because a puzzle didn't work out, ha ha. I did try a little by crafting some cages specifically to be forced numbers, and hoped that having the "one turn per cage" rule would help. Thankfully it did.

But yes, as someone who has NO idea how some of the great setters on this site manipulate numbers on purpose to craft a specific "path" for a solution ... I just do trial and error and publish the ones that ended up working.

am 3. August 2020, 05:10 Uhr von bensc
I’m finding the rules about the snake a little confusing. Can the snake crossover itself by travelling over an already used cell? In the example could the blue snake have continued on from R3C6 to R1C8?

——Thanks for clarifying so the constraint is he cannot traverse a cell in the same direction twice. Therefore Theoretically he can enter and leave a cell 4 times.

In the green example can a snake travel from R6C2 to R4C5?

*** Um, not without turning at some point because that is not a 45-degree diagonal line between those two cells. He COULD continue from R6C2 to R4C4, which is a pure diagonal...

Can I also confirm that the numbers on the edge just indicate cells that contain 1 or more snake parts. That is If the snake crosses the cell and also turns in the cell it only counts as one on the edge numbers?

*** Correct: "Side Numbers indicate how many squares in that row or column the snake uses in his inebriated excursion" - NOT how many "total" times he uses the cells.

am 14. Juli 2020, 02:05 Uhr von Nylimb
Very nice puzzle! I found it fairly difficult, but I was able to make progress right away, and never felt stuck for very long. So I'd say it's easier than several recent puzzles, where I stare at the grid and have no idea how to get started.

Here ya go - I'm not quite as polished as Simon, and at some points could have added some graphics to draw attention to exactly what I was looking at, but hopefully this reveals how the Snake path and turning points plays in with the cages to help the solve!

am 2. Juli 2020, 22:55 Uhr von henrypijames
By the way, I very much appreciate the effort of creating a thematic narrative of a drunken snake slithering all over the place (reminds of Ms. Torque, the sassy viper from XCOM: Chimera Squad - "Oh! Canadians, the maple-flavored ones"). It's really well done, the humorous language paints a vivid picture (and kept me entertained during the grinding solve).

am 2. Juli 2020, 21:57 Uhr von Big Tiger
I just shot a video of my working through the puzzle - once I create the graphics for it, I'll upload it. Just for fun, and to help anyone else who finds this one an oppressive grind.

am 2. Juli 2020, 20:08 Uhr von henrypijames
Come to think of it, this puzzle reminds me of the recent Knight Escape Sudoku by Rotstein, which I solved today, right before I started this one. There too I had the problem of not knowing how to use the path logic and having to do a lot of plain sudoku instead. But anti-knight sudoku with a lot of givens is much easier than killer sudoku with no givens, so this puzzle is kind of like that one on steroids.

am 2. Juli 2020, 18:43 Uhr von henrypijames
I too find this one brutally hard. I also couldn't figure out how to use the snake path more effectively, and had to solve it as a killer sudoku by and large. Especially the constraint that each cage can only contain one turn was never used once.

I also agree that the rules were so complex it was hard to keep everything in mind. I didn't use the one turn per cage constraint because: 1. I wasn't doing well with the path of the snake to beginn with; 2. I didn't know how to use that constraint without knowing the path; 3. I had to keep so much other stuff in my head and didn't want to get distracted by something I didn't know how to use anyway.

*** This is interesting, because when I tested it, both times the fact that each cage had only one turn in it played very importantly for solving some digits. I'll definitely make a video on my solve - I would love to hear reactions.

am 2. Juli 2020, 14:06 Uhr von henrypijames
Does "each cage contains only one such turning poin" mean each cage has to have a turning point?

I wish people would stop using the word "only" in their rule description and replace it with either "exactly" or "at most / no more than".

"Every turn the snake makes is within a cage, and each cage contains only one such turning point." - So every cage has one turning point. Since "only" is not the same as "at most" or "can contain only one", I'm not entirely sure how I could make that more clear. Similarly with the Battlefield instructions you took exception to. I'm wondering ... are you translating into another language? - is there potentially a language/translation barrier?

@Big Tiger: No, it's not a language problem. My English is perfectly fine. When it comes to rules, I prefer the language to be water-tight, as if written by a very expensive corporate lawyer (though I myself am not in the legal profession). And like with legalese, redundancy often helps, even if it's just to eliminate the final 0.1% chance of ambiguity.

am 2. Juli 2020, 01:02 Uhr von Big Tiger
Now the question is: Is this one just way too complex or annoying for the average user, or did it just sink down the list too fast to get noticed? :-P

**** Glad you enjoyed! It was actually relaxing and fun to make.