Having done sandwich variants before, I wondered if sandwich rules could be applied to an irregular sudoku.
The only way I found to do this do this was to have regions all one cell wide paths and it proved quite tricky to create an irregular sudoku with 9 regions with both that characteristic, and that didn't end in ambiguity for the crust locations, and I'm quite happy with the below result.
As it needed more information to solve completely, and I didn't want to just add normal row/column sandwich clues, I created "outer" sandwich clues using different digits for those sandwich crusts, and, between both sandwiches, the grid can be completed.
The digits for the outer sandwich can only be deduced once the inner crusts have been completed, so you could call this an "onion" sandwich :)
Hope you enjoy. 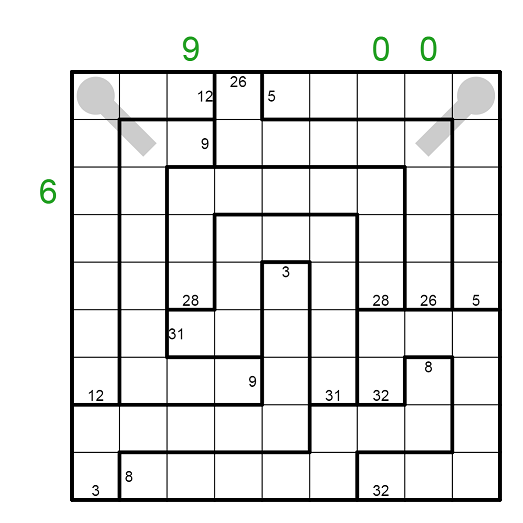 link to solve this online is available via Penpa at https://tinyurl.com/y9vt76zs

am 24. September 2020, 17:42 Uhr von Big Tiger
Well, I came over to try this one as a return favor ... but I am absolutely stuck. Right now I'd have to rate this as 5-stars because I have no idea how to get past the dozen digits I have on the grid so far.

@Big Tiger
Thanks for giving this one a go!

If you can let me know where you are (e.g. clone link from penpa) - in a hidden comment - I can edit that to give you specific pointers.

If you add a idden comment with current state I'll get back to you as soon as I can.