F'red' and Schwartz decide to play a game. They chose to play Connect four, but on a sudoku board. F'red' goes first and plays red, and naturally Schwartz plays black.

To play Connect Four, normally players take turns dropping pieces from the top of the board, as far down as they can go, and the game ends when someone get's Four-In-A-Row either horizontally, vertically, or diagonally.

After many turns, Shwartz shouts "Connect-Four! I win!" 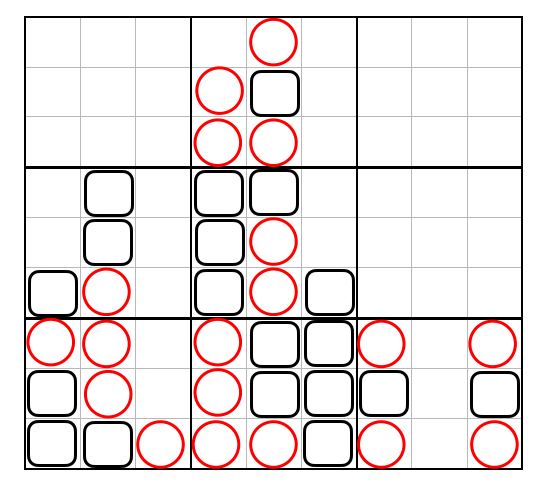 Fred asks, "Shucks. Double or nothing? Shall we continue and play for two four-in-a-rows?"

Schwartz says: "You're on!"

After another flurry of moves F'red' announces "Ha! Connect Four, all tied up! Next one wins!"

Fred says "Aw nuts, and I would have gotten one on my next turn too."

Schwartz says "I'm glad I got to play -- the board at this point is completely determined, and I wasn't going to even get another turn!"

Fred said "It was pretty amazing that we got this far at all! We'll have to play again some time. Congratulations. Great game!"

Here is the board after the Schwartz second connect four, with almost all of the rest of the squares now given. 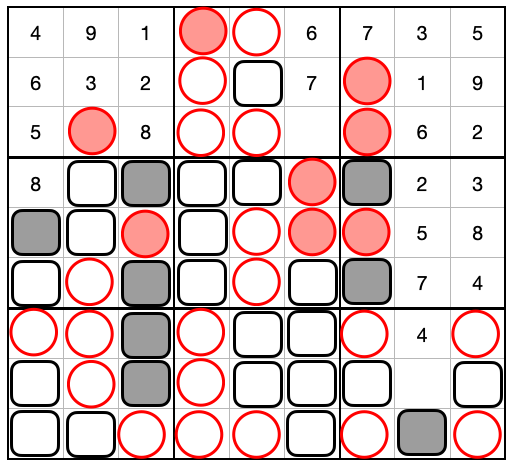 Can you determine what moves occurred in what order?

Lösungscode: The winning row #4 from left to right, followed by the winning column #6 from BOTTOM to TOP (naturally!).

am 18. Juni 2020, 21:43 Uhr von Krokant
That was different, for sure. After a few struggles at the beginning it went smoothly (more or less) until the very last step. Reading is rather difficult, it seems ...

What a delightful game of Connect Four. I'd love to see more of these.

Reply: I might make another one someday -- it was very fun to think of the different strategy.

This idea was inspired in part by a series of Chess sudoku that I ran across. If you're a chess fan, you could try this: https://logic-masters.de/Raetselportal/Raetsel/zeigen.php?id=0003MQ