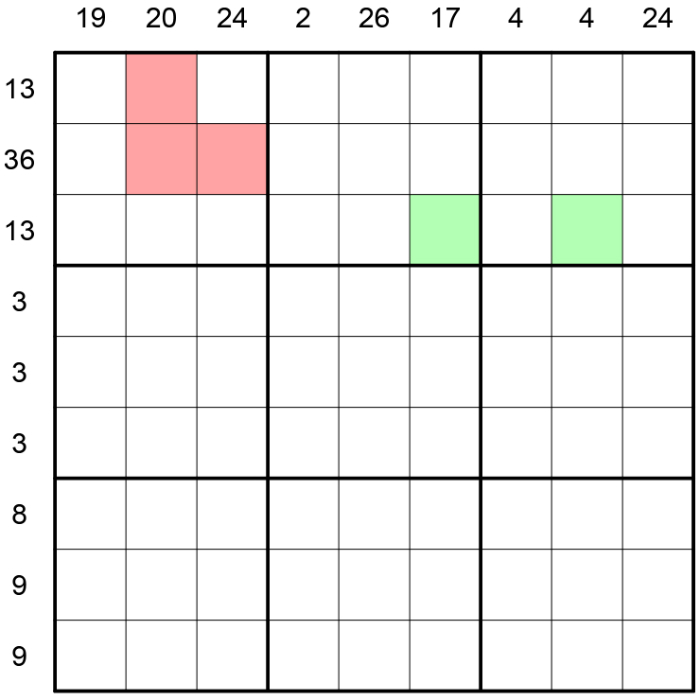 Setter's Diary :: May 29, 2020 :: I was introduced to the concept of an "X" cell on the edge of a row or column when I saw CTC's Simon solve a puzzle that relied on this idea. Using that basic notion, that the first cell of a row or column would indicate how far to sum, or move, or whatever, I tried out a concept that was bubbling around in my brain. And the Battlefield was born.

To my knowledge this is a new variant. In my three months as a novice of creative Sudokus, I have not found it on any CTC video, or anywhere on Logic Masters. I will be happy to credit someone else who came up with it and published before May 29th, but I did create it independent of anyone's previous creation.

I was originally going to number only the rows and columns where a battle took place. I was going to mark all rows or columns where the armies did not meet with a "PT" for "Peace Talks". But that left so many rows and columns wide open that I could not solve the puzzle, and I suspect it was unsolvable by any logical means. So I came up with the idea of summing both types of encounter, and letting the solver decipher whether it was a battle or a truce.

Even then I discovered something frustrating: It is possible, even likely, that there will be very vague areas on the grid prone to pairs of pairs that cannot be disambiguated. Several attempts at a puzzle that could be solved logically to reach a unique solution went in the trash before the one you see before you now came into being. And so here is the very first official Battlefield Sudoku. Enjoy.

On a whim I just now googled "Battlefield Sudoku" - someone has added it to the CTC wiki fandom page, and someone on Twitter promoted it ... And to think, I was just sitting bored in my cubicle at work one day and said, "I wonder if THIS notion would work." :-D

am 11. Juli 2020, 18:19 Uhr von Big Tiger
Woo-hoo, I'm famous now! That was fun. Thank you, everyone, who solved this puzzle when it first came out so that it caught the eye of CTC - and everyone who has solved it since!

am 11. Juli 2020, 04:02 Uhr von Nylimb
@Big Tiger: Congratulations on getting on CtC!
I decided to solve the puzzle again before watching the video. My logic was mostly the same as Simon's but, as usual, I was much slower: 44 minutes.

P.S.: I don't know if you've noticed this, but DiMono has added some tags for battlefield sudokus; see https://logic-masters.de/Raetselportal/Raetsel/zeigen.php?id=0003SY . I've added them to my puzzles too; you might want to do the same.

am 11. Juli 2020, 02:25 Uhr von Narayana
Congrats Big tiger! This has finally been featured on CTC. I also saw your own promo video. Cool office! But it is good that I stopped the video before Simon started cracking and came here to check, because I thought I had already solved this one and it turns out I had not. I can't wait to solve the original Battlefield!

am 4. Juni 2020, 21:03 Uhr von kishy72
At the start, I couldn't make sense of the orange and green cells and how they actually aid the solve and the word march confused me.But kept thinking and understood the concept. Beautiful idea !

am 30. Mai 2020, 02:44 Uhr von Big Tiger
Skywalker: My goal was a puzzle that didn't need any tiny little tweak for final disambiguation and I finally got one! If I put the other one back up, it will be after re-arranging enough digits that it produces one definite solution without any additional clues.