Up The Down Escalator

(Eingestellt am 28. März 2022, 12:58 Uhr von Panthera)
Look, I don't not like non-consecutive sudoku, but boy can it be a pain to set. Case in point - I was pretty proud of the minimalistic clueing in my last puzzle, Silent Speaking, that resulted from adding in some German Whispers. This prompted me to try working with a few other combos; mostly for the potential hilarity, the first one I went for was non-consecutive sudoku with Renban lines. Six months later, here's the result of that particular experiment. I don't mean to imply that it took me all that time to make it work - in the interim, I tried a few other ruleset combinations, almost entirely unsuccessfully, and went back to cryptic crossword setting for while... but, uh, there are literally six months between the timestamps of the first WIP that resembles the completed product and the first where I said "screw it, what happens if I only apply the non-consecutive constraint across most of the grid?"

...which turned out to be the key, thankfully. The resulting stair-like effect inspired the puzzle's name, along with the Sisyphean nature of the setting process, although whether or not the analogy holds up against the completed grid is debatable. Also debatable is the difficulty rating; if you get the right mindset and stick with it, it's probably more like four stars, especially if you've previously solved Phistomefel's Nonconsecutive Renban. Of course he got there before me, but at least we approached things rather differently. If you do find yourself stuck at any point, I can pretty much guarantee you you're missing a bit of non-consecutive sudoku trickery, so I'd recommend staring at a fairly dense section of the grid until it (begrudgingly) yields. Anyways, I do appreciate comments, even if I'm terrible at actually responding to them, so if you feel the need to shout at me after solving please go ahead... otherwise, good luck, and I hope you enjoy the puzzle! 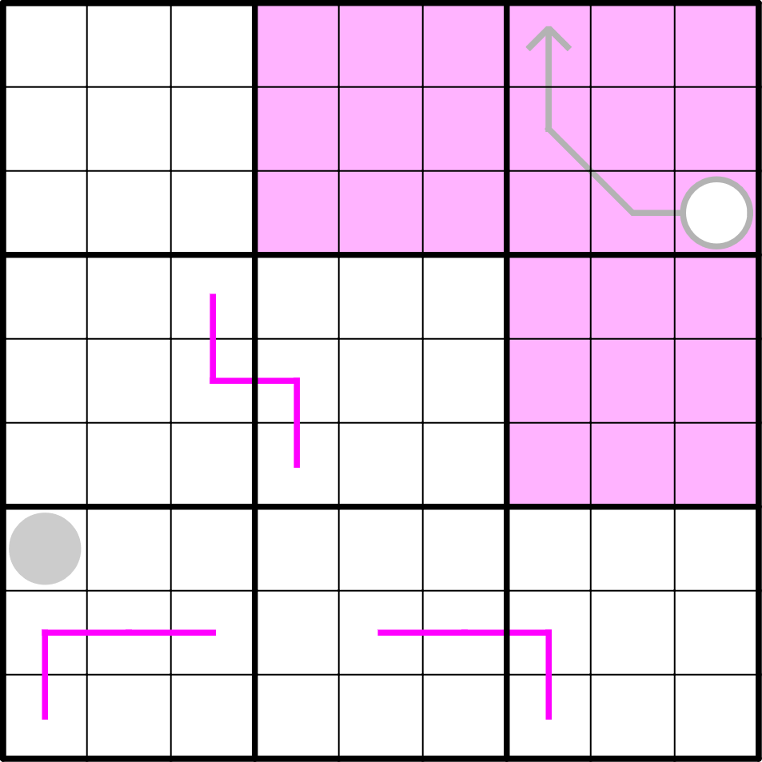 Rules
Normal sudoku rules apply.
Orthogonally adjacent cells may not contain consecutive digits, unless both cells lie in boxes 2, 3 and/or 6. For example, r1c3 must not be consecutive with r1c2, r2c3 and r1c4, whereas r1c4 can be consecutive with r1c5 and r2c4, but not, as already established, with r1c3.
The pink lines are Renban lines; that is, they each comprise a set of distinct consecutive digits that can appear in any order that still satisfies the non-consecutive constraint.
The digits along the arrow must sum to the value in its circled cell.
The cell marked with a grey circle contains an odd digit.

Solve with Penpa+ here! Note that, while the above image has boxes 2, 3 and 6 shaded to represent the zone where the non-consecutive constraint does not apply, this is not replicated at the link. You may wish to reinstate it, or find another way to remind yourself if you'd prefer to use colouring during your solve.

am 29. März 2022, 11:45 Uhr von Panthera
Though it's less of a walkthrough and more of a *run*through, I've recorded a video of me taking the intended path through the meaty middle bit of this puzzle - it's not exhaustively explicatory, covers the start as far as is necessary to lay out the setup and doesn't touch the endgame at all, but I'd say it hits all the main points: