Here is what I think is a new type of clue for sudoku. It needs a better name, but I'm calling it a fence pointer for now. If you think of something better, please let me know.

A fence pointer is placed between cells if there is exactly one cell whose value is X that is X steps away from the fence. The fence pointer then has a value of X. 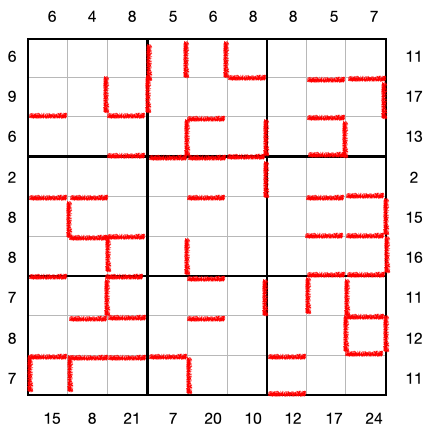 I'm placing the difficulty level at 2, because I think once you catch on to the rules I think it's fairly straight forward -- but grasping the rules and how you can use them will be new and might warrant a 3. If the concept is worth developing, I'll try to hand select clues to try to make a harder one.

Lösungscode: Row 5 followed by Column 5, no spaces or commas in between. (18 digits)

am 29. Juni 2020, 01:48 Uhr von RockyRoer
updated picture to remove one pointer that pointed to two values.